For those of you sitting on unfilled tags, this story should really keep ya hoping for your next outing. Travis Lanphar e-mailed photos of his gator season – he was also kind enough to share a story. I figured I’d share with everyone:

“My brother, neighbor, and I all drew 1st Phase Polk County tags this year. The first alligator we took this year was a mean one. He measured 10′-2″ and had a very bad attitude. We had been watching this guy for a couple months before the season and knew he was a good one. We chased him for a long time before we were able to corner him, but when we did he was ready to fight. He bit a hole in the bottom and side of my brothers 12-foot airboat. We were able to subdue him and put him out of our misery, and had a real good start to the first day of gator season.

The next night we got on a pretty nice gator with a little less of an attitude but still a fighter. He ended up measuring 9’11″ which is much bigger than we all thought he was. The next night we all had the attitude of, ‘How could this season get any better?’

It was my night to tag a gator, and I had been saying all along that I wouldn’t mind taking an 8 footer. I had several opportunities but couldn’t bring myself to do it after everyone else had tagged really nice gators.

The night was coming to an end, and we thought our luck had finally run out. Then as we were running back to the ramp, the water and mud exploded. We circled back to follow a mud bubble trail that seemed as wide as the boat. Four hours later, with all of our snatch hooks broke off, we were finally able to take this beast. We snatch-hooked this guy 7 times and lost him. One time we had him hooked and harpooned, and he still was able to get free. He wasn’t mean and nasty, just real powerful, and he knew it. If he didn’t want to do what we were making him do, he would just leave and we couldn’t stop him.

We finally brought him to the boat ramp at about 5:30 am. He measured 11’3″ and was crazy fat. A few nights later we were able to tag a fourth alligator that measured 9’0″ and seemed way too easy to catch. We still have 2 tags left and can’t wait to see what the rest of the season holds for us.”

Indeed. That’s a great season by any standard. Congrats! 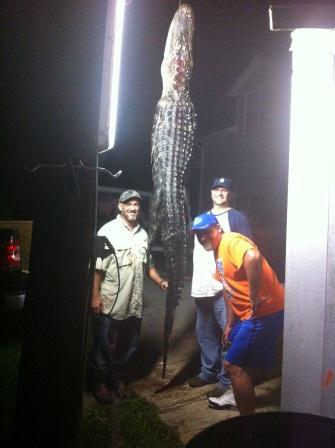