Each Gator Hunt I do has a special meaning, or story that goes with it.

Normally, I don’t share those as those stories are for my clients to share around the camp fire or having drinks with their friends and family.

This one though, I thought I would share as it is very special to me.

Bob and Kim have hunted with me going on 10 plus years. We have hunted multiple locations across Central Florida and have harvested some great alligators. I have hunted their family and friends over the years.

After a fairly routine hunt last year Bob informed me fairly nonchalantly, I may add that he had cancer. He had just found out recently and wasn’t sure what it would entail.

Fast forward to this year when both Bob and Kim got tags for excellent locations. Kim’s Hunt went well as we harvested two great gators.

During her Hunt there was some discussion about whether Kim would be doing the hunting of all four gators or if Bob would do the filling of his tags. They were not sure if he would be able to do this.

When the hunt came it was decided that Bob would be doing the hunting and he assumed the position on the boat. Bob and Kim generally are meat hunters. Like all hunters they enjoy harvesting a big gator but it’s not their primary focus. They enjoy the hunt and enjoy every bit of protein the alligator has to offer. We harvested our first gator, which was a nice 8 in the first 30 min.

It was at that point that Kim leaned up and told me that this would prob be Bob’s last Hunt and she would love for him to take something big as she did not believe that he would be gator hunting again.

My response was the same as it was for every hunter who asks this of me (which I get asked a lot). I will try my best and see what we can do.

They don’t necessarily like to be out super late either so I said we would hunt for something 9 plus for a bit and then take an 8 if need be.

I spend enough time in most areas that I have good gators I hunt every time I’m there. This location is no different. In fact there has been a gator that I have hunted for that last three years. Every year I get one chance at him.

The first year I had clients from up north who missed him at 5 yards because they got so excited.

The second year the west coast crew bounced the bolt off of his head.

This year like I do every time I hunt this area, I made my standard pass to hunt him. I didn’t expect to see him but you can’t kill him if you don’t hunt him.

I ran down the canal and saw an eye at the end. A little far from where he normally is but nothing crazy. (300 yards). Long before I got there he went down and came bubbling by me at light speed.

Immediately, I knew it was him. I told Bob if you see gator “shoot” he is a good one. I fell in behind him and the chase was on. He gave us three opportunities before Bob got a shot off.

For those that have never hunted with me, my style of hunting is not typical for today’s guide. I’m a combo of old school harpoon guy mixed with snatch hook and crossbow. But I still hunt old school harpoon style, as in I don’t sit much!!

When I fall in behind a gator you have to be quick as I am running, he’s moving and it’s going to be quick.

The bolt flies and hits him in the back of the head I heard the thwack and felt good about it. I pulled the bouy free from the crossbow and started to pull tight. With a sinking feeling I felt the arrow pull free and come to us.

I quickly scanned for bubbles and saw nothing so I grabbed the rod, threw the last place I saw him and felt it come tight. Then the game was on!! He put on a show like you normally don’t see, blew water over the boat, under around etc etc. after a short period to tire him out we stuck him with the big hook and loaded the Bangstick.

At this point, I still didn’t know exactly how big he was but knew he was good and we were all very excited. I got Bob in position and eased him up. At that point I knew, it was the gator I had hunted for all these years. And how fitting for Bob’s final hunt to take this Dinosaur.

The bangstick shot was perfect and all that was left was tape, spinal cut, and loading. 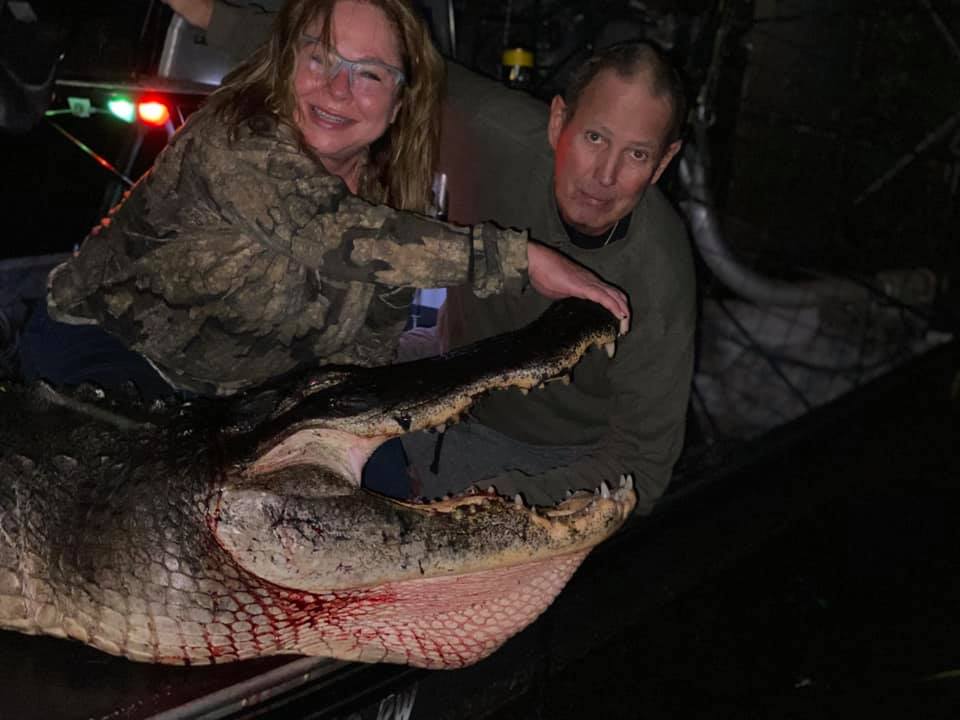